Influences on the Barley Way: More on Animation and Design

This post continues exploring the research made in preparation for my film "The Barley Way".

The influences in this film weren't used in a way of direct replication. While watching and re-watching a great number of cartoons for the combined joy of entertainment and study, I've come across elements that stood out to me as especially great. These elements were studied and integrated into the film in a way that complied with my needs of production and aesthetic goals.
This post will examine elements of design and animation with emphasis on the Looney Tunes realm as well as other related sources of influence. I do not contend to be on the same level as the animation greats I am influenced by, the purpose of the post is not to make that kind of value judgment, the purpose is to do what the title says: explore more influences on the film, focusing on animation and design.

CLAMPETT'S ANIMATORS
After seeing this film, Tom Minton has said that my "Intense study of Avery's timing and Scribner's distinctive animation is paying off". I was excited beyond words that such a wonderful artist recognized what I've studied, and appreciated it. I've been fascinated with Rod Scribner's animation for years, and have spent many hours freeze-framing his scenes.

Scribner's inventive spacing is unparalleled in the world of animation, his ability to make seemingly irrational drawing choices that read so smoothly when animated is nothing short of brilliant.
I heard from a very reliable source that Scribner used to draw from the sports page, those images portray incredible energy locked in one frame.
My favourite element in Scribner's animation is the exclamation pose,

Disclaimer: the above collage may include more than one of Clampett's animators


The exclamation poses are very unique, the body doesn't simply stretch, rather the characters stand on their toes, stretching the legs and pushing the rest of the body diagonally upwards, then a curve starts from the hip area and arches the spine outwards, with the ribcage raised.
I used this exclamation pose in a 3/4 back view, which I haven't seen done before. Scribner's full animation often shows the exclamation extending upwards until resuming a more neutral pose. In order to allow for more held-cel time in my film, I went for an overshoot, especially on the hands and head, with slighter changes in spacing on the rest of the body, and then settle in a way that preserves the energy of the pose. 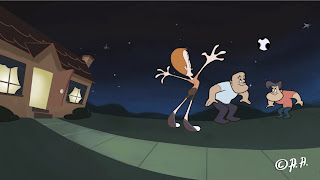 THREE SOURCES OF INFLUENCE IN ONE SCENE: Seq2 sc11
I'm influenced by the way Scribner draws hands and distorted poses that are bent in a limber way.

Scribner's hands and distorted bends made a direct impact on this drawing especially: 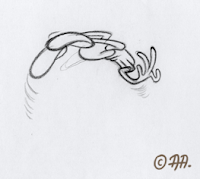 But Scribner wasn't the only influence in this scene, A few frames after the drawing discussed above, I took note from Richard Williams' retelling of Ken Harris' advice, that a speeding character should stretch in the last frame before hitting a hard surface. 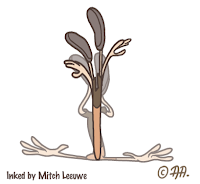 In a previous post, I noted Floyd Gottfredson's influence for the pose leading to those discussed above. 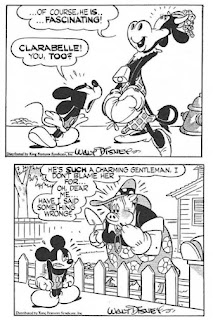 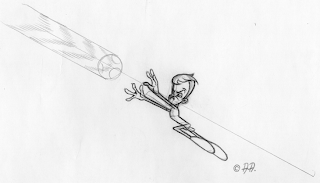 MULTIPLE INFLUENCES IN A SINGLE POSE


Often one pose was influenced by multiple artists, sometimes I looked at various sources before drawing a pose, and sometimes the mental image of influential characters just went through my head while drawing, as in the case of this pose: The alien girl was influenced by Scribner's Coal Black, especially for facial expression and the construction of the body. The overall pose: line of action, gesture and limbs were also influenced by Floyd Gottfredson. 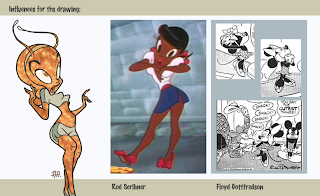 As you can see, this is not direct replication, rather the study of inspiring artists and the identification of their principles and trademarks affects my work. sometimes consciously as in the case of problem solving, and sometimes subconsciously as in the case of the pose above.
ANIMATION METHODOLOGY
After years of watching Warner's cartoons, I've looked for a way to follow their wild "takes" in a way that complied with my production needs, those of advanced limited animation.
I've freeze framed cartoon "takes" and other wild and appealing actions done by many animators, and translated them in a way that demanded less frames, and allowed for more held cel time. I saw that although takes varied in terms of drawing choices, timing and individual touch, the "takes" closest to my aesthetic goals often followed a 5 pose pattern:
The 5 pose pattern below is very flexible, each step can be handled differently, sometimes steps can be omitted, and the pattern can be used for many kinds of wild actions:
A. Key pose 1
B. Anticipation
C. Burst out
D. Overshoot of Key pose 2
E. Key pose 2
Pose C was the trickiest and most fun problem to solve. In preparation, I looked at the way my favourite animators solved it. In some cases I used smear animation, 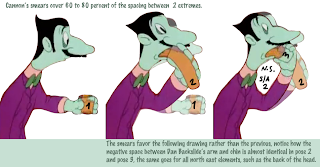 Bobe Cannon's smears cover about 60-80% of the spacing between Key 1 and Key 2, favoring Key 2. This result in a very smooth transition. I applied these observations to my own scenes. 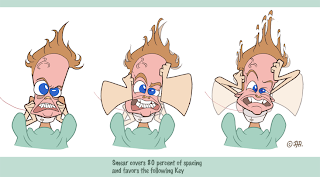 Cannon has also animated scenes where the smeared drawings last more than one frame, in those instances, the first smear also covers about 60% of the spacing gap, the following drawings are spaced closer to Key 2 and the trail leading from Key 1 shortens.
Here's how the smear fits in the context of the 5 pose pattern:

This smear covers about 90 percent of the spacing between the poses.
Another way to handle pose C is gapped spacing, and also very stretched poses which incorporate some smearing on select parts of the character, later I noticed that Clampett's animators also used that method, note the dog's hand. 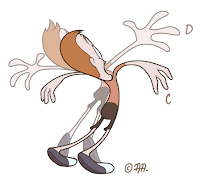 CHUCK JONES
The Warners' cartoons have also influenced me in terms of facial expressions, Some of my favourite cartoonists, such as Pete Emslie, Joe Haidar and Scott Shaw noticed that I used Chuck Jones expressions in a few deliberate moments. 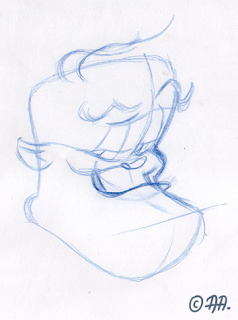 These expressions weren't copied from specific frames in Chuck Jones' cartoons, rather they resulted from watching many of his cartoons, they were drawn from the accumulation of memory and feeling, and used to reflect on the mental state of the characters in a humorous way.
Below is an outburst of Joy resulting from epiphany: "Dad's always been proud of me! I can put my previous thoughts about his perceptions of me in the bin!" 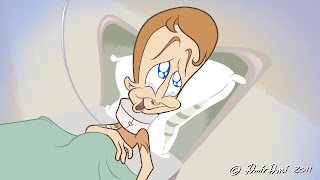 Below is an expression representing the sweetness of pure intensions, understood as such by the person expressing them 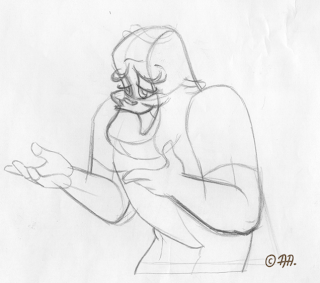 Below is downright smugness 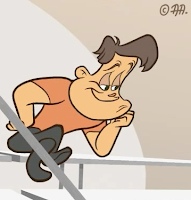 The likeness to Jones' expressions is achieved in a way of graphic design: teardrop shaped eyes with thin pointed tops, round bottoms and long curling lashes. The mouth also follows a curved "V" shape on a big smile, and more of an "L" shape on a moderate smile. The cheeks resemble a feather shape.
EXPRESSION CHANGE GAG


Jones sometimes used slight changes of expression on the mouth and / or on the eyes to go for a laugh.
In this scene from "Rabbit Seasoning", Daffy Duck sours at the sight of Bugs Bunny winning and fooling Elmer Fudd. Only the face moves while everything else is frozen. The sound effect of the protruding tongue really sells the gag.


I tried the same thing here: Jossefat is upset that his brother has succeeded in gaining dad's favorable attention. Only the mouth moves to a sneer, followed by the sound effect of a growling tiger.

Believe it or not, some poses and expressions were even based on Disney cartoons! 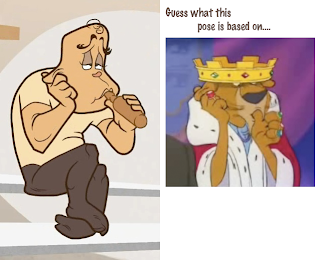 Most other expressions were drawn from the mirror and a few from the mind's eye.
CONSTRUCTION AND DESIGN
Chuck Jones' lummoxes and dogs also influenced the design of the Dad character.
In the beginning, both Dad and Joseffat were constructed from rubber hoses, but that lead to confusion among viewers. 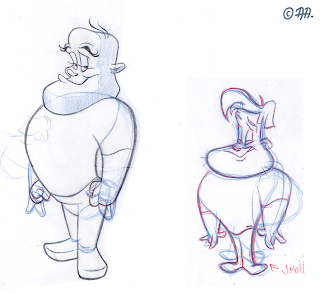 I kept Jossefat the way he was, since his roundness was suitable for a child character. As for the Dad, I started looking for different ways to construct his first level of forms, they mostly came from Chuck Jones. The quick tracing exercise below was meant to explore how a more humanized head would fit on a Chuck Jones lummox bulldog 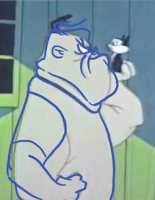 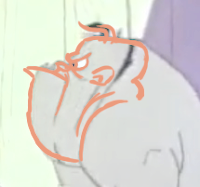 I saw that a good way to distinguish between the silhouettes of Dad and Jossefat was to give dad a bigger contrast between straight and curved lines, implying a more 'blocky' anatomy. I added a curve to the spine, and counterposed the angle of the rib cage and hips: 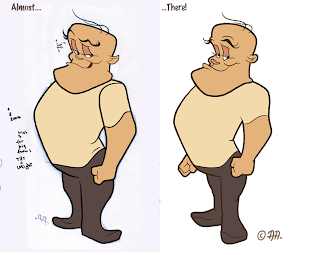 Look at the legs, that's Gottfredson again!
The characters were designed to look distinctive by their silhouette and construction alone, surface detail was kept to a minimum, that is the 60's gift to production: saving on pencil mileage. 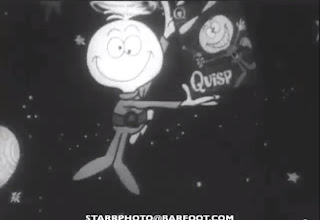 Inspiration for the heads also came from my friend Brock Gallagher who sometimes draws no neck for his characters. While doing cleanup on his fabulous film "The Peasant and the Root", I saw how much agility that design choice gave his characters, I decided to apply that design to my own characters as well.


Brock was also the voice of Jossefat, I could have never found another actor with so much energy and inner cartooniness. The same goes for the great Pete Emslie, who's voice really helped develop the character of the Dad.
INFLUENCES FROM NATURE
Jossefat's head is a hybrid between a palm tree and an eggplant. The purpose was to come up with a pompous shape that is also funny and appealing. 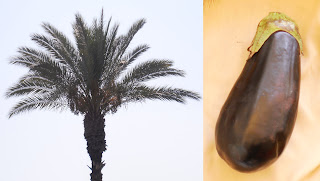 Some people have recognized the micro-gag in Sequence 3 where he is juxtaposed with a vase of flowers in the shape of his head. 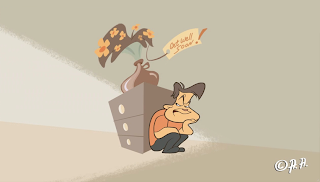 This has been a summary of some of my favorite components of animation and design in the film, it was a list of observations from a variety of sources and a discussion of their application in a way that is compatible with the production needs and aesthetic goals of the film.
TO BE CONTINUED...


In future posts I will discuss musical timing and story.
Posted by Amir Avni at 7:38 am 8 comments: